The History of Weightlifting 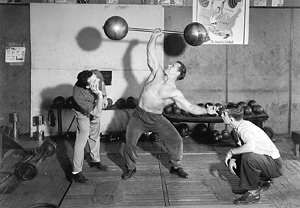 The history of weightlifting traces back to the beginning of recorded history where man's fascination with physical prowess has been found among ancient writings. A 5000-year-old Chinese writing tells of soldiers having to pass fitness tests. Ancient Greek sculptures point out to lifting feats. The weights were stones but later changed to dumbbells, the origin of the word dumbbells comes from the practice of removing clappers from bells and thus turning them soundless. The first Olympics was held in 1896 and the sport was included and made an official sport, it did not appear in the 1900 Olympics but returned in 1904 and has been a regular sport since 1920.

In 1994 U.S. lifter Robin Coad was the world champion in the 50 kg class. And in 2001 the U.S. junior women's team won the teams Championship at the junior worlds including three gold medals from Cherly Haworth. In the 2002 world junior Championships Cherly did it again with three gold medals as a member of the U.S. junior women's team, she had also won bronze at the 2000 summer Olympics in Sidney Australia. The team has been participating in all major world events and has been dominating the sport up to today.

Women have also participated in the sport since 1987 at the World Championships level. The U.S. women have won medals in eight Championships and continue to dominate the world stage. Women's weightlifting was first participated at the Olympics at Sidney Australia; Tara Notts was the first woman to earn an Olympics medal in the 48 kg class. The New Encyclopedia on modern weightlifting has been designed and contains rich information on nutrition, dieting programs, body building competitions and managing injuries. The book is useful to anybody interested in bodybuilding and is helpful to beginners and the advanced; it also contains routines that can fit any individual's exercising program.

Most bodybuilders consider ISO tensions as the best form of exercise and you must practice this to become a successful bodybuilder, SO tension alone is the only exercise that can help you gain big and strong muscles if done the right way, many people do not know that devotion and focus are the major things in bodybuilding. The weightlifting encyclopedia discourages anyone who is interested in weightlifting from alcohol. Nutrition is very important to anyone doing weightlifting, the book gives guidelines that you have to check when it comes to nutrition .The book also contains myths that people talk about and gives all the facts.

The Weightlifting encyclopedia is a book that has been structured to give you incredible benefits, it explains all the techniques of the Snatch and Clean Jerk, development of Power, Strength and Flexibility and building the mind of a weightlifting Champion. It also gives a detailed look at dealing with injuries that may occur during training and how to avoid them, creating a training plan. A must read for any coach and athlete engaged in the sport, it describes the author's opinion and gives recommendations. It is a monumental work which far exceeds any work in weightlifting; undeniably it gives a very good way of developing an athlete and makes our world better.
Read more »
Labels: powerlifting history, weight lifters, weight lifting, weightlifting, weightlifting history
Next Article » Home