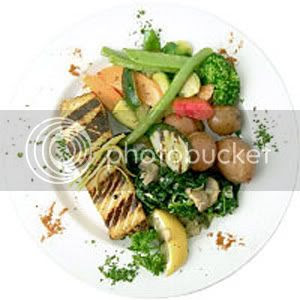 You probably already know that refined carbs - such as the ones found in cakes, white bread and white flour- are bad for you but you'll notice that this plan also avoids starchy carbs in the form of potatoes, rice and pasta. That's because all of the above will create an insulin spike, drive up your blood sugar levels and - in all likelihood - be stored as fat.

You're going to avoid this by getting your carbs from vegetables, which will give you plenty of energy for your workouts while keeping you full and leaving your blood sugar stable. Some diets - such as the increasingly popular paleo diet - go even further and suggest that you should limit your intake of sweet potatoes but we're not going to give you too much to worry about. Focus on avoiding the really bad stuff for now and you can always make further tweaks later.

It may sound like a difficult task to avoid these foods, but if you stick to what's in the plan you'll find you don't go hungry over the three weeks. In fact, if you did nothing but cut out carbs, you'd almost certainly lose weight, so this is arguably the most important thing you can do.
Share this article :
Labels: carbohydrates, carbs, Diet, fruits, Health, muscle training, vegetables

Im grateful for the article post. Fantastic keep on posting.