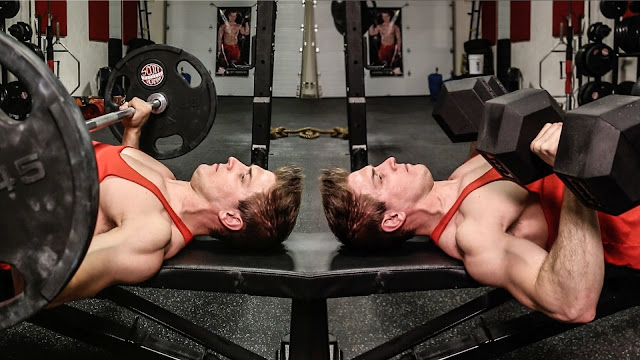 Dumbbells versus barbells. This is a battle with a clear line drawn in the sand. Proponents on each side have strong beliefs about why their weapon of choice is the best. If you listen to one side long enough they might just convince you that they are right, until you hear the arguments from the other side. When it really comes down to it, the truth of the matter is that both sides are right. A balanced bodybuilding program should incorporate both barbells and dumbbells, because each have their benefits, and their flaws.

Dumbbells may be descendents of the ancient training tool, the Indian club. The barbell is a more recent development, although the use of a bar to carry objects suspended from both ends has been cited in ancient literature. So, the actual origin of each is blurred slightly by the acceptance of various predecessors. Regardless of when each type of training tool began, they both have enjoyed success in spurts. At first they were the only options for weight trainers, then machines, bands, balls, and other equipment came in to replace them, however, they have both enjoyed a come back in recent years.

Barbells require two hands and a balanced grip. Barbell exercises can utilize more weight due to the two handed grip and leverage advantage of pulling the strong side in to help the weak side. More weight means more strength and size gains. It is also argued that a person can handle more with a barbell than they could combined between two dumbbells. This is because the bar acts as a lever between the two sides and the strong side can “pull” the weak side along. For this same fact, however, some exercises work to make the strong side stronger and the weak side never closes the gap.

Dumbbells are used by one hand and require the use of the supporting muscles to stabilize the weight. The fact that the weights are held separately requires each side to work equally. Dumbbells work great for equalizing strength on both sides. Exercises that can be done with barbells can also be done with dumbbells, with the added benefit of pulling in the assistance muscles. The balance and stabilization required when doing dumbbell exercises cause twice as many muscles to be called into play when performing the exercises. Dumbbells allow you to move your hands through a natural range of motion during exercises, reducing wrist, elbow and shoulder strain, as well.

So, it doesn’t matter which side of the line you find yourself on, dumbbells or barbells. Both pieces of equipment should be a part of your training arsenal. A combination of barbell and dumbbell training will help you develop a balanced physique and work all those small stabilizing muscles, at the same time. You don’t have to draw a line in the sand, instead put them both to work for you.