The first thing anyone notices when they see a bodybuilder for the first time is their shoulders. It doesn’t matter if it’s a face-to-face meeting or just a glimpse from across the gym. The shoulders cap the arms and frame the chest, they are the mark of power and ability and well developed shoulders command attention and admiration.

For some reason many bodybuilders don’t give their shoulders the attention they deserve. A great many bodybuilders get stuck in a pattern of focus on their chest and biceps, ending up with uneven and non-symmetrical development in their other major muscle groups.

One reason for that may be that some people think shoulders are difficult to stimulate properly. When with proper kinetic understanding, the shoulders can be developed to be a winning attribute of any physique. 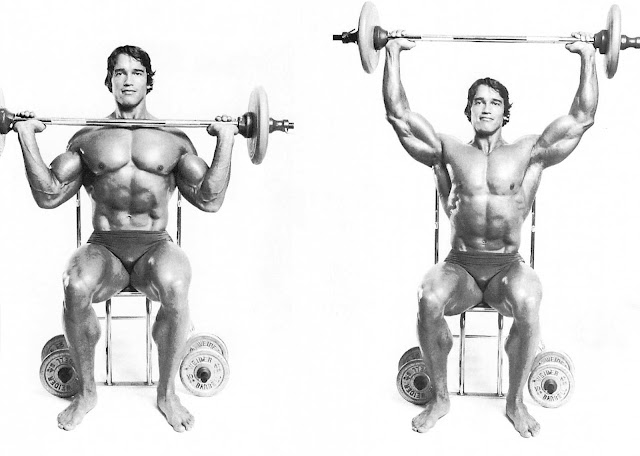 Being a core movement and one of the only shoulder movements affording the skeletal position and leverage to lift large amounts of weight, Seated Military Shoulder Press is one of the most effective deltoid movements around. Performed properly, the military press will allow you to build powerful, round and well defined deltoids.

There is some argument about the proper form for military press; some demand that the bar be brought down to the nape of the neck, behind the head, stating that this is the proper bottom position of the movement. While other claim the correct bottom position is at the collarbone in front of the head. There may be advantage to both positions; the rear position afford a deep stretch to the muscles of the shoulder and puts the shoulder socket in a desirable position for providing ample stimulation to the anterior and lateral deltoids. The front position puts more focus on the anterior deltoid and offers indirect stimulation of the upper or clavicle pectoral, but it also offers a potentially safer position for the shoulder socket itself.

The bones of the shoulder are relatively fragile on their own, but when coupled with the dense and encompassing deltoid muscles, it makes for a very well-built joint. However, when the joint is overextended backward (beyond the lateral plane of the body) it is at risk of separation, and the rear position of the military press brings that joint dangerously close to that overextended position. 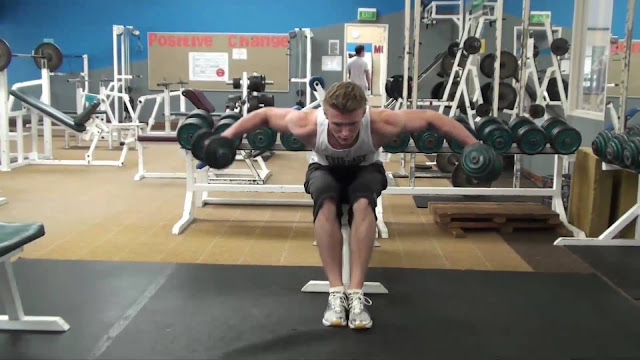 Many bodybuilders reserve lateral raises for the shaping phases of their training plans, to be used during periods of cutting where the goals is developing further definition in their muscles. As such lateral raises are often sold short as a method for developing size and strength in the deltoid.

At first, this movement may be difficult to perform with weight that is heavy enough to provide deep stimulation, but over a small amount of time and when done properly Lateral Dumbbell Raises are highly effective for providing good stimulation to the lateral and posterior deltoids.

As always, form is if paramount importance with this movement; it can be performed while standing or seated, it can be done single arm or with both arms at once. It can be done with dumbbells (as the name implies) or with the use of a cable crossover or cable row machine.

Whichever method is used, the basics of the movement are the same, starting with the weight at you hip, gripping the dumbbell normally with your palm facing in toward your body; raise the weight, straight out, away from your hip until your hand (and the dumbbell) is perpendicular to the floor and even with your shoulder. Do not raise the weight higher than the horizontal plane of your shoulder and be sure to control both the negative and positive parts of the movement.

Quite often it is helpful to perform this exercise in front of a mirror, so that you can monitor your form during the movement and identify if you are inadvertently swinging, tilting or otherwise helping the weight up rather than lifting it with strict form. 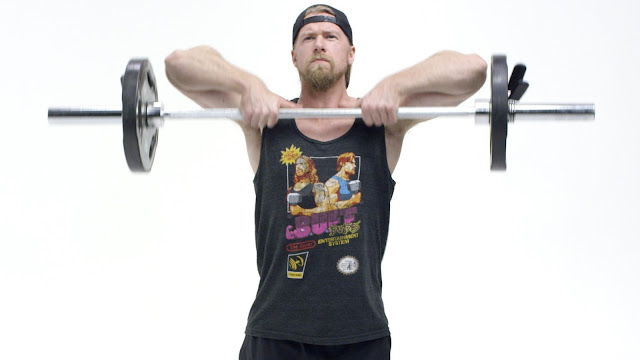 A familiar sight in most gyms, Upright Rows are an old stand-by for many bodybuilders, used as a good movement for stimulating not only the lateral and posterior deltoids, but also the trapezius major. This is a highly effective movement that is easy to perform and for most of us, is one that allows a good mix of heavy weight and strict form.

Upright rows can be performed using a barbell, dumbbells or cable machines, and the movement is quite simple. Begin with an over grip on the barbell, held at the waist; lift the bar straight up, holding the weight tight against your abdomen and chest. The top of the movement should have the bar resting just below your chin and your bent elbows extended above the horizontal plane of your shoulders.

Because of the pulling nature of this exercise, there is a tendency among beginners to improperly swing their upper back when lifting the weight. Proper form dictates that the body should be held rigid and straight throughout this movement, forcing the shoulders to carry the weight load. For this reason, it is likely more effective for beginners to use a barbell rather than dumbbells or a cable machine, as both of these other methods change the angle of the movement and lend to improper form. 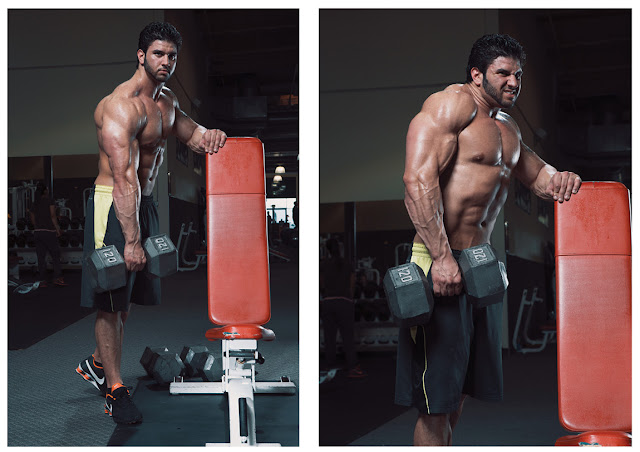 As previously mentioned, many bodybuilders will treat their traps (superior, middle and inferior) as a part of their back routine, though for reasons of scheduling and efficiency, it may be better to combine traps with the rest of your shoulder routine.

Perhaps the most effective exercise for developing large, sloping traps is heavy barbell shrugs. Due to the basic nature of the trapezius muscles, it is important to use relatively heavy weight to stimulate the muscle group.

Using an Olympic barbell and either a squatters rack, a smith rack or a standing barbell rack, grip the loaded bar with an overhand or alternate grip (one hand over, one hand under), stand straight up lifting the weight off of the rack and shrug the weight using your traps to lift.

Some people suggest that it’s desirable to rotate the shoulder forward through the movement, while others suggest it’s better to shrug straight up and down. It may be a simple matter of comfort and you should chose a method based on your own preferences, though it is important to note that rotating your shoulders through a heavy movement such as shrugs can put undue stress on the joint and cause cartilage problems if done incorrectly.

Ultimately, the shoulders are a key element of anyone’s physique and should be given a due amount of focus. The above are recommended movements that are highly effective for stimulating the muscles of the shoulders, though there are many variations of these exercises and even several movements that have not been discussed. It’s important, as with all other aspects of your training, to gain an understanding of all the available exercises and movements, to better populate your training plan with the most appropriate tools there are for your situation.

steroids use in sports