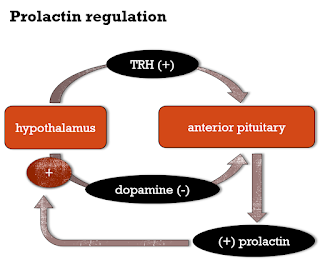 In opposition to what we normally see with all of the other pituitary hormones, the hypothalamus predominantly suppresses prolactin release from the pituitary gland. In other words, there is usually a hypothalamic Stop that order set against the lactotroph, and prolactin is released only when the order is released.

A note of interest is that If the pituitary stalk is severed, prolactin release increases, while secretion of all the other pituitary hormones decreases dramatically due to loss of hypothalamic releasing hormones. But this is an unlikely scenario for most athletes and should obviously be avoided nonetheless.

The neurotransmitter Dopamine appears to act as the top dog prolactininhibiting factor. Dopamine is secreted into portal blood by the hypothalamic neurons. Next it binds to receptors on lactotrophs, and inhibits both the synthesis and release of prolactin. So chemicals and drugs that interfere with dopamine release or receptor binding also increase the release of prolactin. These are called antagonists. Drugs and chemicals that either increase, act as, or potentate dopamine are agonists.

Of course there are other chemicals in the bodys Action/Reaction Factor closet that positively regulate prolactin. The major ones are GnRH, TRH (thyroid Releasing Hormone) and VIP (Vasoactive Intestinal Polypeptide). By the way, hyper-stimulation of the nipples may have a stimulatory effect upon prolactin release as well. But that is one we will leave alone.