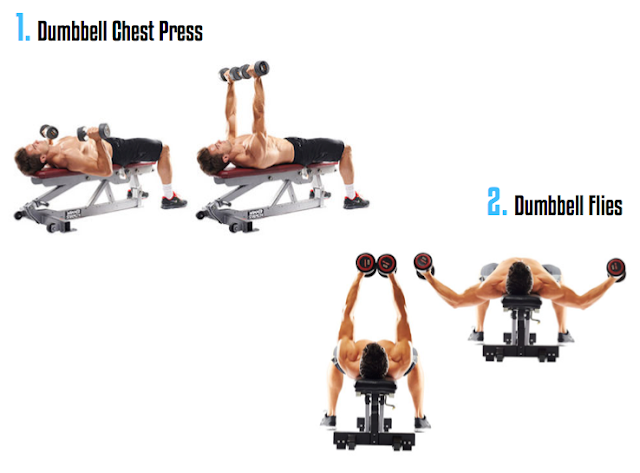 Let’s face it, there is no greater body part in which to obtain complete muscular development than the chest. Sure, girls will ask you to “make a muscle” as you flex your biceps. And yes, there is no denying that a well-built and defined “six pack” displaying total abdominal development will curry you some favor with the fairer gender. But when it comes to identifying a body part which stands out from all others – in the beach, the bedroom, and the bodybuilding stage – none is more important than a thick, sculpted, completely developed set of pectorals – a well built chest!

Numbers lifters and strongmen, we cannot forget you either! Powerlifters probably already know that there isn’t much chance a man with a bird chest can bench press four wheels on each side. You don’t get to a point where you can lift big without being big. Strength gains equate to muscle gains, and vice versa. And for the strongmen among us, it’s common knowledge that the mechanics of picking up Atlas balls, pushing men from a circle, and the other tasks involved in your competitive arena demand a solid and thick base of pectoral muscle. Olympic lifters, it goes without saying that your core lifts on the local to world stage require an abundance of upper body strength commensurate with a well developed chest.

Developing a truly amazing chest can be difficult. Gyms are packed with guys who start their workouts with the same body part every single week: chest. And, gyms are also packed with guys who possess some pretty pathetic chest development. Some will be ripped, others will be thick – but it is very rare that you observe a set of pecs that is thick, separated, and fully developed in all of the major areas – upper, outer, middle and lower pectorals. Here are some things to consider when designing your own highly effective chest workout routine – one that will be capable of transforming your chest from its present state to an amazing condition in

Instead of beginning your workout with the standard heavy compound movement such as barbell or dumbbell presses, why not begin the day with specific targeting of the muscles being targeted today – namely, the pecs! Benching involves the chest, shoulders, triceps and even back muscles. A movement like light weight dumbbell flyes on the incline bench will effectively torch your upper chest, and leave your supporting secondary body parts relatively unscathed. By the time you begin your first actual compound movement, your chest will be on fire and your shoulders and triceps will be nowhere near failure.

Everyone uses the flat bench press for their chest workout, right? But most everyone in your gym has bunched up, underdeveloped pectoral muscles as a result of this training practice. Often overlooked is the parallel bar dip with chin to chest. Add this movement and see if your overall thickness, as well as strength on other movements, doesn’t increase substantially. You should also see a boost in triceps growth as a result of their use for chest mass.

If you want to hit the upper chest, then you will want to use incline bench pressing or flyes. Decline presses and flyes target the lower pectoral line, where the chest meets the abdominals. Middle chest is developed with standard bench press, and the outer pecs are targeted with movements such as machine flyes or cable crossovers. Many a gym is packed with people flat benching for years while complaining about their lack of upper pectoral development. And they walk past the incline bench complaining, every single time!


Leave the triceps at home

Combining chest and triceps training days can be a good way to save time – but also a recipe for short-circuiting your efforts on one or both of these movements. Instead, you should move triceps exercises to a combined “arm day” where you will hit biceps and triceps together. This will not only give your arms (and back) adequate training attention, but also give you the ability to hit chest longer, with more sets, and to absolute…

At the end of your workout, you should be unable to stabilize a barbell, making bench pressing impossible. Your upper pectorals, triceps and shoulders should be completely engorged with blood as well, nullifying any chance of a thorough set of any exercise. At this point, you have one of two options. You can pat yourself on the back (well, try to…) on a job well done, or you can spend the next 5 to 7 minutes completing partial movements. Have a seat on the Hammer Strength or nautilus chest Flye or Benching machine, and just complete lightweight, even partial repetitions!

Stick with this routine for eight weeks, and there’s a pretty good chance you’ll have developed a set of thicker, wider pectorals capable of catching attention anywhere – from the boardroom to the bedroom to the bodybuilding stage. Get pumping!