Martial Arts: An Activity for the Entire Family

When I mention to strangers that I once studied karate, they usually give me a quizzical look. "Really?" they say. Or "You're kidding!" A co-worker chuckled, "Why would you want to do a thing like that?"

It was a good question. Why did I do it? What made a mild-mannered office clerk don baggy white pajamas and learn karate? A mad desire to punch someone's
lights out? Not really.

The primary motivation came from my kids. I mean, when a single mother is raising three boys, all of whom want to be black belts, she better do something.

My contact with karate began when Michael, my firstborn, was in the third grade. A shy, skinny eight-year-old, Mike was elected scapegoat by a couple of bullies at his school. Naturally, I wanted this nonsense to stop. But what could I do? I reported the the mistreatment to his teacher, and she was sympathetic. But she had twenty-seven other kids in her charge, and she couldn't be everywhere at once. The moment her back was turned, the bullies would strike. I called the other boys' parents. They assured me they would talk to their sons, and I assume that they did. But they couldn't be everywhere either. The abuse got worse. I was desperate for a solution, so when an acquaintance suggested giving Mike karate lessons, I thought, why not? 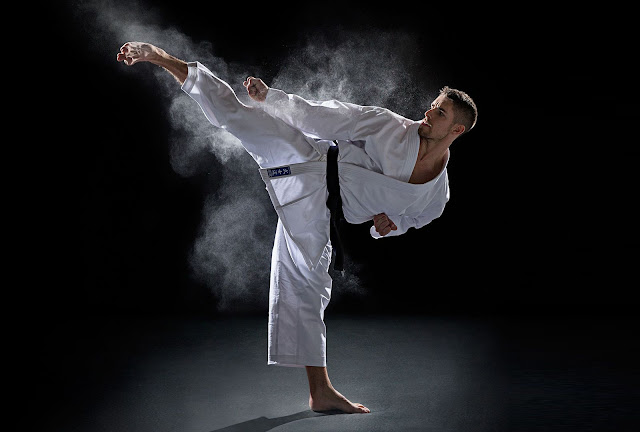 I broached the subject with Mike, and his eyes lit up. He said he thought it would be really cool. But then he shrugged the notion off. I realized his confidence was at an all-time low and he didn’t think he could accomplish anything. Exercising a little parental authority, I said, "Try it for a year. After that, you can quit if you like."

We lived in a small town, and there was only one martial arts establishment in our Yellow Pages. When I called, the proprietor, speaking in a pleasant baritone, explained how Mike could enroll. The sound of that voice,
however, did nothing to prepare me for the man. When I delivered my son to his first class and met the fellow who would become his instructor, I found myself blinking up at a six-foot-five, 210-pound, fifth-degree black belt.

Always conspicuous by his absence - when he left the room, it was like someone moved a mountain - the sensei (teacher) was benign, enthusiastic and relentlessly cheerful. During that first session, Michael stumbled along for an hour, scarcely able to put one foot in front of the other. But the sensei was undaunted. "He'll do fine," the man assured me heartily. "Just give him time." Bursting with joy, I drove home that day confident that my son soon would become a fighting, killing machine.

I had much to learn about karate.

Mike was not taught to fight - at least not in the manner that I anticipated. On the contrary, he was urged to avoid fights. He learned that the true purpose of karate is to build character, and that it is noble - never cowardly - to sue for peace. Of course, karate people do learn a fighting technique, but they use it only when they can neither negotiate nor escape.

At first, the philosophy I heard in those early classes made no sense. To work so hard acquiring a skill on the understanding that it should never be used seemed paradoxical. But if I ever feared I was throwing my money away, my concern faded when I noticed some profound changes in Mike. Now he realized that he could, if necessary, demolish any of the boys who bullied him. This knowledge altered forever his role in their game. Calmly, firmly, he faced his tormentors, turning their taunts and jeers aside. Without bravado, he showed them he was not afraid.

No longer able to get a rise out of Mike and stymied by the change, the bullies let their abuse taper off. After a school talent show in which Mike gave a karate demonstration, the bullying disappeared. In fact, the little toughs were so impressed that they tried to make friends with Mike. Without striking a blow, he had won their respect. Even more important, he discovered that he could stand up for himself without hurting anybody. This discovery gave him a new sense of his own worth, an inner dignity that couldn't be denied.
Share this article :