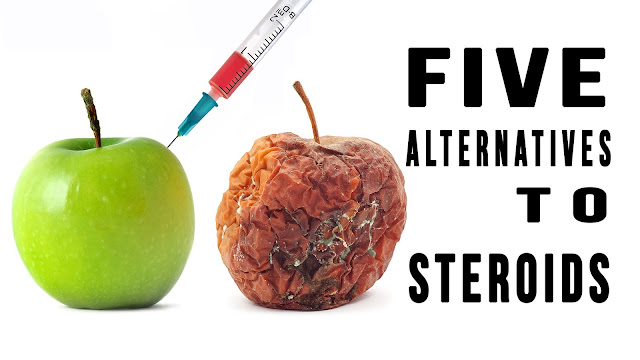 Teenagers who understand or are at least aware of the potential dangers of taking anabolic steroids (including the possible legal repercussions) to improve their athletic performance and enhance their appearance tend to look into the potential alternatives because they think these alternatives are safe. Here is a low down on some of the alternatives out there:

Creatine is a naturally occurring amino acid that is necessary for the human body to function properly – in short, it helps bring energy to the muscles in the body. The body does produce creatine, but it can also be supplied to the body from various food sources. It is possible that creatine will increase muscle mass and it has been shown to help increase athletic performance for those participating in sports that require short-term spurts of action – including benefits for football players, track participants and power lifters. On the same note, studies have shown that creatine has not been successful in helping athletes increase their endurance.

Creatine hasn’t been thoroughly studied to determine the full extent of possible side effects on teenagers. Additionally, creatine is not regulated, so anyone who buys creatine is taking a risk because there is no way to determine its purity, what doses are safe and effective and what regimens are appropriate. Some side effects of creatine include abdominal pain, nausea, diarrhea, water retention and muscle cramping and straining. Studies have also shown a possibility of high doses leading to liver, kidney and heart problems. When teenagers supplement their body’s natural creatine levels, the body may stop naturally producing creatine – which may have detrimental effects on children and teenagers who are not yet finished growing.

Dehydroepiandrosterone, referred to as a steroid precursor along with several other drugs (the others ones are illegal without a prescription) is related to the hormones testosterone and estrogen and is often marketed as a nutritional supplement that can increase muscle performance and appearance as well as treat depression and reduce the risk of heart disease. It is a naturally occurring substance in the human body and it’s also often marketed as a safe alternative to anabolic steroids.

Some of the side effects associated with DHEA are similar to those of anabolic steroids including increased types of cancer and excessive hair growth in women and gynocomastia in men.

Ephedra, a plant derivative, is marketing as both a weight loss tool as well as a performance enhancer. It is also often used to reduce fatigue and increase alertness. It works by stimulating the central nervous system and has been proven to actually help treat certain types of asthma because it is also a decongestant. The drawback to using ephedra, however, is that is increases the heart rate and blood pressure which can lead to heart attacks and strokes.

Because these drugs are often marketed as nutritionally supplements, teenagers often think they are safe to use (especially compared to anabolic steroids). Teenagers are also often looking for a “quick fix” to help them look better and perform better when it comes to sports.

Teenagers who want increase their appearance and athletic performance would be better off doing things naturally. This includes finding an age appropriate exercise regimen as well as an age appropriate nutrition program. Additionally, teenagers need to make sure they get enough sleep to give their body time to recover, avoid tobacco and other drugs and consult with a coach, trainer and a nutritionist to get on a healthy plan.
Share this article :
Labels: creatine, dehydroepiandrosterone, dhea, ephedra, steroids, teenagers, teens